Welcome to the third installment of Disney In Review, a series in which I watch old Disney Channel Original Movies and overanalyze them so that any future viewings you may want to partake in will all be tainted by my stupid, stupid opinions. As with Mom’s Got a Date With a Vampire and Smart House, I took a look at one of my favorites, as well as one of the better-known Disney Channel Originals: Brink! In case that title doesn’t ring a bell, Brink! is the movie that inspired 90’s kids across the country to take up rollerskating for a week before ditching it for something involving far fewer tears and parental disappointment.

I was surprised this week to discover that neither of Andy ‘Brink’ Brinker’s parents are dead or in the midst of a vicious divorce that will certainly put an enormous strain on the kids. Having said that, Brink’s father is temporarily disabled by an incident with his back, which puts an enormous strain on the kids. So, I’d say we’re still 3 for 3 on having an absent parent as a plot device. The driving force behind the movie is Brink’s parents having to deal with the stress of losing half their income and potentially not having a job to come back to. The conflict for Brink, however, is nothing like that at all.

Brink considers himself a “soul skater”, someone who skates for the fun of it instead of for money or fame or the thrill of winning, and he has a group of friends who share the same mindset. Those who skate for anything other than fun are considered “sellouts” in this movie and oh, would you look at that, here comes the bad guy: Val is a bully who is so overtly antagonistic it’s actually comical. Val is sponsored by a company, which makes him a terrible human being. His role as villain is built up throughout the movie as we watch him insult, shove, and try to murder his peers. At one point, he even utters this line regarding milkshake flavors:

“Don’t give me strawberry, do I look like I’m wearing a dress? I’ll take chocolate.” 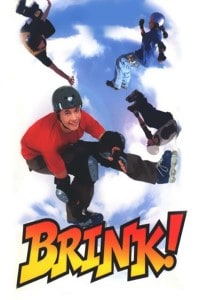 These posters don’t seem to be getting any better.

Val offers Brink a spot on his sponsored team, which throws our hero into a spiraling mess of angst for the remaining 70 minutes of the film. The main conflict in the movie is that his family desperately needs money, but Brink doesn’t want to be considered a sellout by his friends and skating team. Does Brink have integrity, or does he want to give up his friends and his passion for such a meaningless thing like money? However, at no point does the movie attempt to ease up and grant that plenty of people love to skate and have also been fortunate enough to make a career out of it, or that doing what you love to support your family shouldn’t be considered shameful or regarded as selling out.

Brink signing on with Val’s team, the X-Blades, is portrayed in the sketchiest way possible as he meets the team owner in a dimly lit warehouse. “Heh heh, your parents… Your parents know about this?” the owner asks, “They’re cool with this?” Brink lies and says they know, and then we’re treated to a close up shot of the two shaking hands against morose, a-tragedy-has-just-occurred music. This scene is followed directly by one that attempts to rub in the horrible nature of Brink’s choice by having him come home to the sister from Smart House playing the same exact character with the exception of her apparent ability to detect the slightest of changes in backpack weight, for she immediately calls out Brink on having more stuff in his bag than when he left.

“What’s in the bag?” she asks with the sass of a desperate housewife.

“Nunya business,” Brink replies with enough snark in his voice to make Pope Francis himself want to stab the kid in the throat.

Inevitably, his friends find out about the sponsorship and refuse to let him explain how his dad is disabled and needs help supporting his family. His dad who, by the way, has to be begged into having a meaningful conversation with his son about why he’s been depressed for the past two weeks. His best advice to Brink is to not define himself by what he does, but rather who he is, and while the message of “you’re not defined by what you do” is a decent one, I don’t see any reason why being defined by your passion is objectively a bad thing, nor how it somehow negates every other aspect of your existence. I am a writer; that’s how I define myself. But that doesn’t nullify my personality or worth to society. Surprisingly, I can balance who I am and what I do, a feat that Disney seems to think is wholly impossible.

Anyway, Brink quits Val’s team by throwing a chocolate milkshake in his face.

“You got beef with me, you take it up with me Sunday at the championship,” Brink says.

What’s strange is that by the end of the movie, even Brink’s friends aren’t following the lifestyle of “we skate for fun” anymore. They’re snapping at each other over petty things and insulting one another’s techniques. Brink even ends up sponsoring his old team with new skates and shirts brandishing the logo of a local company and not a single one of them sees the hypocrisy in their choice to wear the new gear. The film ends with Brink winning the competition and turning down a sponsorship deal with team X-Blades, a plot point that tries to bring things back around to the “it’s about fun, not money” moral, except that it was about money the whole time because his dad was disabled.

Here’s the thing: If you want to watch 90 minutes of a kid being emotionally and physically abused by everyone in his life for making a responsible, heartfelt decision, then Brink! is the movie for you.

No, The Star Wars Episode VII Trailer Did Not Leak
Nexus 5 Caseology Review: Great Case for the Price
To Top